The gender wage gap is really a child care penalty

A couple of graphs make this point. 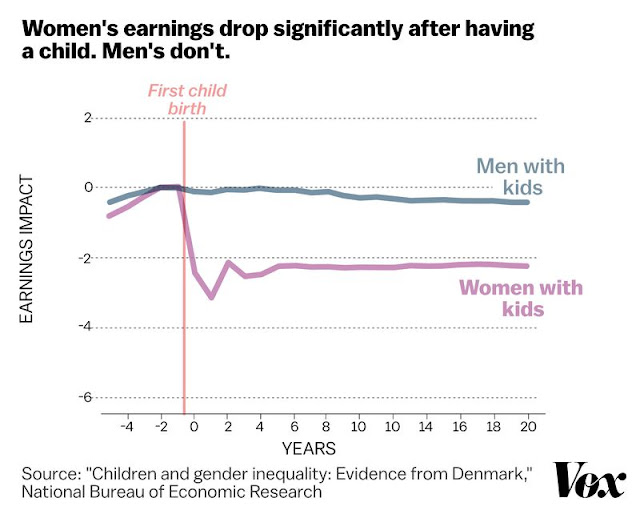 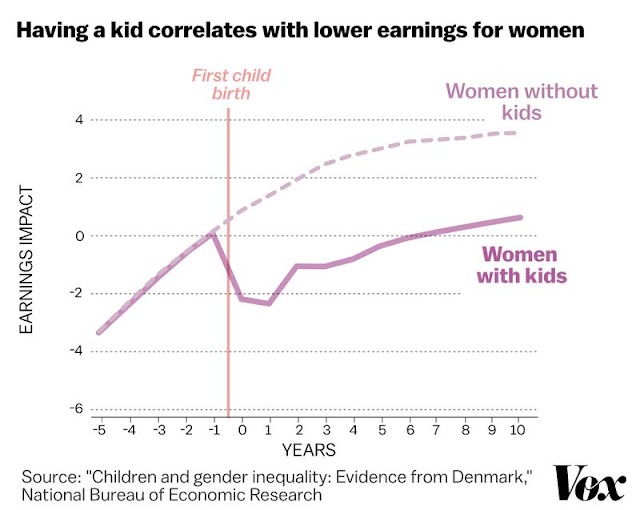 These graphs come from a column at Vox. The column is A stunning chart shows the true cause of the gender wage gap by Sarah Kliff.


His [Kleven] study is among a growing body of research that suggests what we often think of as a gender pay gap is more accurately discussed as a childbearing pay gap or motherhood penalty.

Childless women have earnings that are quite similar to men’s salaries, while mothers experience a significant wage gap.


A 2009 study led by University of Chicago’s Marianne Bertrand echoes that conclusion. It examined the earnings of thousands of business school graduates. It found that women earned an average salary of $115,000 right out of graduate school, while men earned $130,000. Men also worked, on average, a few more weekly hours and had a bit more prior experience as they entered the workforce.

But nine years into their careers, women saw their salaries rise to an average of $250,000 — while men’s salaries averaged out at $400,000. Men were earning 60 percent more than women.

“The one thing which is not changing is the effect of children,” Kleven says of the gender wage gap. “This is very persistent and constant. All the other sources are declining, but the child effect sticks, and that ends up taking over as the key driver.”

Historical drivers of the gender wage gap — a lack of education among women, for example — are disappearing. But the professional penalty women face for having children is stubborn, and it isn’t going anywhere.

Such findings are consistent with the findings of yet other researchers such as Claudia Goldin. Goldin (Professor of Economics at Harvard University) has written,


These findings provide more nuance in explaining why the gap widens with age and why it is greater for women with children. Whatever changes have already taken place in American society, the duty of caring for children — and for other family members — still weighs more heavily on women. And if you thought that moving to a more family-friendly nation would eliminate the gap, think again. In several nations, including Sweden and Denmark, a “motherhood penalty” in earnings exists, even though these nations have generous family policies, including paid family leave and subsidized child care.

Such considerations bring us to a very sensitive area: domestic arrangements at home, especially among couples with children. These are personal questions. In theory, gender earnings equality is possible when both parents take off the same amount of time and enjoy the same flexibility at work.

So the answer to the pay gap may be in the choices made within the home. And that makes it difficult for public policy to deal with.
Posted by Paul Walker at 4:06 am

Men with children also earn more than those without - yes, after adjusting for age, education etc.

Who would have thought it, a sexually dimorphic species has a division of labour in the raising of offspring?

It is still critical to ask for a salary increase, especially when you are a victim of such gender biases at work. To mitigate these social costs, it is recommended for women to use more collaborative terms such as ‘we’ instead of ‘I’. Even if your boss decides against raising your salary because of tightening budgets or a need to meet stretch goals before they can help build your case to upper management, you would already have planted the seed.