There is a cool new book and website available on the work of F. A. Hayek designed for the general reader.

The book is the The Essential Hayek by Donald J. Boudreaux. 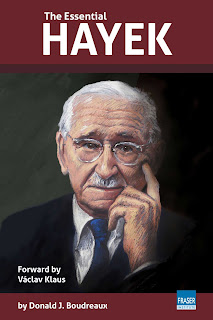 The chapters in the book are:


1. How we make sense of an incredibly complex world
2. Knowledge and prices
3. Individual flourishing and spontaneous order
4. The rule of law, freedom, and prosperity
5. Legislation is distinct from law
6. False economic security and the road to serfdom
7. Economic booms and busts
8. The curse of inflation
9. The challenge of living successfully in modern society
10. Ideas have consequences

The website is The Essential Hayek where you can download a free pdf of the whole book, read the chapters of the book and watch short videos which explain the ideas in the book.
Posted by Paul Walker at 6:29 pm No comments:

A couple of days back I downloaded the Kindle version of Ilya Somin new book on the problems with eminent domain, "The Grasping Hand: 'Kelo v. City of New London' and the Limits of Eminent Domain". This has turned out to be very timely given that The Productivity Commission has come up with the most appalling policy idea I have seen in I don't know how long, that is, the idea that there is a potential role for compulsory property acquisition in assembling large-enough land parcels for achieving proper economies of scale in construction of housing as a way of dealing with problems to do with the supply of land for homes.

Fortunately not all of New Zealand is as crazy as the Commission. Eric Crampton makes the case against the Commission's idea in an excellent post over at The Sand Pit blog.


Hold-out problems are the usual justification for use of eminent domain. Suppose that you’re a property owner. You get wind that a big developer is planning something substantial for the neighbourhood – and that it would include your property. If you know that everybody else has sold their rights to the developer, well, you could charge a price that would have you get a pretty substantial chunk of the developer’s profits. Or, suppose you got wind of where the government was planning on putting in a roading project. If you bought up the properties ahead of the government, and if you knew the government didn’t have other options for the route, you could hold the government to ransom for that property. And so the threat of eminent domain expropriation guards against this kind of strategic behaviour that can threaten the viability of beneficial projects.

I have been a fan of option contracting as a way around hold-out problems. Suppose you’re the same property owner above. The developer comes to you and offers you a deal. The deal is this. He’ll pay you $10,000, right now, for the option to buy your house in a year’s time at a price that looks fair to you. Whether or not he buys the house in a year, you get to keep the $10,000. He says he’s putting together land for a development but he isn’t quite sure where he wants to put it yet – it could be here, it could be someplace else. You can’t tell whether you’d be the hold-out as you neither know whether your neighbours have signed up, nor whether your property would wind up being used anyway. If the developer is clever, he’ll have identified a couple of sites that could work reasonably well for the project and would be buying options over both sites. You can’t do better than taking the $10,000 in hand, if you think the price is fair. If you don’t, the sale would be inefficient anyway.

Hold-out is pretty cheap in an environment with ever-escalating land costs due to stupid zoning rules. You lose nothing by just sitting on the land and waiting for the capital gains. Some developers have told me that, in hindsight, they should never have bothered trying to put housing up in some parts of Auckland – the costs of dealing with Council meant that they’d have earned a much better return by just landbanking rather than developing. But that changes where the other policy recommendations from ProdComm come into play. When far more land can be put to its most productive use, you can’t expect that your little plot will forever appreciate. Another offer to develop might not come because the development will have gone elsewhere.

Is land assembly through option contracting feasible? It worked where I grew up. Manitoba Hydro wanted to put in wind turbines. Before they did the wind mapping, they bought options from all the farmers where they might have wanted to place the turbines. Where they had options over a long enough ribbon of land where the wind turned out to be right, they exercised those options and put up the turbines. Nobody could hold-out because nobody knew where Hydro would want to put the turbines and because there were multiple potential options. Some people didn’t sell Hydro the option because they didn’t think that the price that Hydro was offering for access to the turbine site was worth the hassle it would cause in the field – and fair enough. But in an eminent domain version, every one of them would have been considered a hold-out and forced to sell.

Think about how this eminent domain proposal would pan out in New Zealand practice. ProdComm talks of using it in a Urban Development Agency (UDA) for Master-Planned developments. In practice, that would mean the UDA in partnership with a big developer strong-arming homeowners to sell out, on threat of forced sale, in order to put up a new subdivision or higher-density development.

Think too of all the land assembled under threat of compulsory purchase in Christchurch. How much of that is now in more productive use? Was small owner hold-out the main problem there? Really?

As alternative, the UDA could instead maintain a register of the owners of the fragmented property holdings and pass along option contract offers to the owners, lowering the transactions costs of assembling the land. They could also pass along declined offers to Council, that Council might update its land valuation figures. If you’ve turned down a million dollar offer on a site that’s rated at $500,000, well, the rating is probably too low.

A question I wonder about with eminent domain is, How do you know that a person who is not willing to sell is in fact holding-out? After all a refusal to sell could just mean they value their property more than the price they are being offered. There may be nothing strategic in what they are doing at all. Especially when it comes to homes or businesses. They may just want to live or work where they are. Consider that they could have sold their property for the market price at anytime but they haven't. I would assume this is because they don't think the market price is high enough to compensate them for the loss of the property. So how is forcing them out efficient?

Note: I have changed a number of "hold-ups" to "hold-outs" in the quote from Eric's post just because I'm a pedant!

The Austrian tradition in economics

From the Free Thoughts series at Libertarianism.org comes this interview with Professor Peter J. Boettke of George Mason University in which he talks about "The Austrian Tradition in Economics".


Boettke traces the school’s history from Carl Menger through Eugen Böhm-Bawerk and Joseph Schumpeter, Ludwig von Mises, Friedrich Hayek, and Murray Rothbard to contemporary economists such as Israel Kirzner, Vernon Smith, and Mario Rizzo. He explains what Austrian economics does and does not do, and distinguishes between what he calls “mainline” economics and “mainstream” economics.

What distinguishes Austrian economics from other schools of thought in economics? How did the Austrian school come to be known as the free market school?

Posted by Paul Walker at 6:33 pm No comments: