Eric Crampton on "Recipe for Disaster"

On Radio New Zealand Nights, Dr Eric Crampton of the New Zealand Initiative talks through the findings of the Initiative's latest report, Recipe for Disaster, about the government's policy preparedness for the next big earthquake.

Posted by Paul Walker at 1:04 pm No comments:

The effects of rent controls

The example of Mumbai, India.

In this video, from Marginal Revolution University, Alex Tabarrok discusses the effects of rent controls on the supply of rental properties in Mumbai.

Posted by Paul Walker at 6:53 am No comments:

In this podcast, IEA Research Director Dr Jamie Whyte is interviewed by Kate Andrews and they discuss Oxfam's latest report on global inequality, arguing that the poverty-relief charity is attacking the economic system that has lead to the greatest fall in absolute poverty the world has ever seen.

Posted by Paul Walker at 8:25 pm No comments:

The album Silent Revolution by The Benevolent Dictators is an album in which the songs draw on material from the works of Adam Smith. Four songs relate to Smith's A Theory of Moral Sentiments and four related to An Inquiry into the Nature and Causes of the Wealth of Nations.

In the Director's Cut version of Silent Revolution the motivation for and the reasoning behind the songs and the songs relationship to Smith's work is explained.

Posted by Paul Walker at 5:56 am No comments:

Alexander the Great: narcissist or hero?


My paper will not focus on the legend of Alexander rather my paper will focus on what motivates a man enough to conquer most of the known world. I will argue that Alexander’s motivations stem from a rather unhealthy self-love or narcissism that was brought on from an early age through a close attachment to his mother, Olympias.

Why is it I find narcissist so plausible?
Posted by Paul Walker at 4:59 pm No comments:

Email ThisBlogThis!Share to TwitterShare to FacebookShare to Pinterest
Labels: general

No Ordinary Woman: The Life of Edith Penrose


What a dramatic and eventful book. Edith Penrose (1914-1996) is a not so well-known but highly underrated economist, with her major contributions coming in the theory of the firm and industrial organization. As a girl, she survived only because her father shot a rattlesnake about to kill her. Later, her first husband was murdered, right before their first child was born. She and her second husband, working in Switzerland, helped Jews escape from Germany, and she later did food planning during the war in England. In 1948 the couple lost one of their three children, right before his third birthday. Later she received a doctorate in economics from Johns Hopkins, studying under Fritz Machlup. Machlup at one point wrote a ten-page letter to her, with the top proclaiming: “I implore you to shut off your hypersensitivity and to overlook it if I sound condescending, arrogant or otherwise unpleasant. I just want to be helpful.”

She headed the Owen Lattimore Defense Fund. Later, she did not feel entirely comfortable teaching at Johns Hopkins (she was treated badly and not tenured) and so she ended up teaching in Baghdad and Beirut and was also an important early faculty member at INSEAD, perhaps their first world class hire. She became an expert on energy economics and multinationals, traveling and advising around the world more or less without stopping. Drawing on her doctoral work, she also published on IP problems for developing economies, an area where she was well ahead of her time.

She enjoyed writing poems and limericks for her own pleasure. She also was known for her “direct questions” and her “disconcerting remarks.”

Cowen makes a couple of other comments which for me are interesting. He says,


I would describe her work as halfway between economics and the business school tradition, broadly in the Austrian school but more descriptive and without the political slant of Mises and Hayek.


She was the founding thinker behind “resource-based” theories of the firm, whereby firms are best understood in terms of what resources they have access to, rather than their products. This was a dominant approach from the 1980s onward, though she received only marginal credit for her seminal role. She also focused on which were the slack resources of a firm or not, as a means of ascertaining where the firm was headed, and ran all this analysis through a lens of expectations and perceptions, reflecting her studies with Machlup. She thought in terms of what a firm’s “moat” might be, as you might expect from a contemporary Silicon Valley analyst.

These comments for interesting since an anonymous referee for my upcoming book, A brief prehistory of the theory of the firm, wrote,


Third, I’m a bit befuddled by the fact that Penrose’s work isn’t covered as part of the history. Her work has been very influential and fits neatly in the history of the theory of the firm (as is noted in the manuscript). But she also fits in the overall development of ideas, as one of two branches following the work of Robinson (the other is Coase, as noted by Jacobsen (2008; 2011)).

This gave me purse to think more about why I hadn't included Penrose in the book. I replied to the referee by saying,


I was in two minds about Penrose since her work is pre-1970 [and thus in the time period covered by my book] but is, like Bylund and Winter, more heterodox than mainstream. Penrose is properly more well known in management than economics. The economics mainstream hasn’t taken up Penrose’s ideas to any great degree.

and, in a latter email,

And I think I'm right in saying that Penrose has been more influential in management than economics. This related to Cowen's point about Penrose being "halfway between economics and the business school tradition". It is the management, business school, scholars who have developed Penrose's ideas, in the "resource-based theories of the firm", rather than the economists who have followed Ronald Coase, and to a lesser degree Frank Knight.

Cowen is likely right when he says Penrose,


is a not so well-known but highly underrated economist

At least as far as economics is concerned.
Posted by Paul Walker at 3:27 am No comments:

The Economist’s Big Mac index gives a flavour of how far currency values are out of whack. It is based on the idea of purchasing-power parity, which says exchange rates should move towards the level that would make the price of a basket of goods the same everywhere. Our basket contains only one item, but it is found in around 120 countries: a Big Mac hamburger.

If the local cost of a Big Mac converted into dollars is above $5.28, the price in America, a currency is dear; if it is below the benchmark, it is cheap. The average cost of a Big Mac in the euro area is €3.95, or $4.84 at the current exchange rate. That implies the euro is undervalued by 8.4% against the dollar. 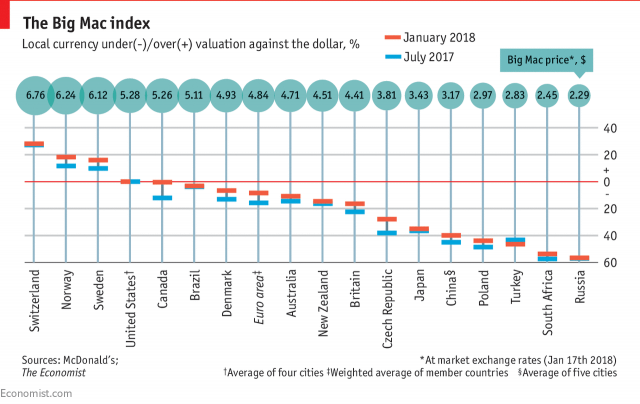 The New Zealand dollar looks a bit cheap.
Posted by Paul Walker at 3:01 pm No comments:

Emily Oster on diabetes and diet, disease and vaccinations and debunking pregnancy myths

From the Economic Rockstar podcast come this interview of Emily Oster by Frank Conway. Professor Oster (Economics, Brown Univeristy) is the author of “Expecting Better: Why the Conventional Pregnancy Wisdom Is Wrong — and What You Really Need to Know”.

The life of Edith Penrose

Angela Penrose, writer and journalist and daughter-in-law of Edith Penrose, will present 'No Ordinary Woman', the first biography of Edith Penrose, author of The Theory of the Growth of the Firm, a remarkable woman and distinguished scholar. Born in 1914, Edith Penrose spent much of her academic career as Professor of Economics at SOAS, having previously held a joint appointment at LSE and SOAS. As well as the theory of the firm, her research included the international patent system and innovation; multinational firms and foreign investment; oil companies and the economies of the Middle East; and economic development.

In the week Angela Penrose was given The Theory of The Growth of the Firm to read as part of her PPE course at Oxford she met her future husband, Perran Penrose, the son of the author, Edith Penrose. She and Perran went on to teach in Libya, Ethiopia, Burundi, and Zambia where Angela also worked as a journalist. She has extensive experience of communicating in the printed and broadcast media and working directly with children and young people as a teacher and youth worker. She has worked with development and humanitarian organisations and was Director of Policy with Save The Children.

This event is co-organised by the SOAS Department of Economics and the SOAS School of Finance and Management.

Posted by Paul Walker at 5:23 am No comments:

Robots and jobs: evidence from the US

From VoxEU.org comes this audio in which Daron Acemoğlu is interviewed by Tim Phillips on the topic "Robots and jobs: Evidence from the US".

Concerns that industrial robots will replace human labour are widespread. Daron Acemoglu discusses how automation creates a displacement and a productivity effect. Furthermore, the effect of automation on employment heavily depends on the sector it is used in.

A link to the audio is available here.
Posted by Paul Walker at 6:11 pm No comments:

The sugar levy: a briefing

The IEA in London has released a short paper, The Sugar Levy: A Briefing, on the 'sugar levy' that was announced in March 2016 by the then Chancellor, George Osborne, in the UK.

A summary of the paper's conclusion reads:
Such results should act as a a cautionary tale for those wanting such taxes in other countries.
Posted by Paul Walker at 2:29 pm No comments:

The Institute of Economic Affairs’s Kristian Niemietz and former Head of Research at the Adam Smith Institute Ben Southwood discuss the housing shortage, its supply-side nature and the politics which underpin it.

Interviewed by the IEA's Kate Andrews, the pair examine the historical origins of the housing crisis, which date back to legislation introduced under Clement Attlee’s government in the 1940s.

They also look at the well-organised NIMBY movement (short for “Not In My Back Yard”), and its influence on government policy.


Many of the issues discussed here apply not just to the UK but also to many other countries, like New Zealand.
Posted by Paul Walker at 2:48 am No comments:

Silent Revolution by The Benevolent Dictators

Great news, the album Silent Revolution by The Benevolent Dictators is now available. The album is based on the works of Adam Smith. What could be cooler?!!

Fun in the sun

Posted by Paul Walker at 6:13 pm No comments:

Email ThisBlogThis!Share to TwitterShare to FacebookShare to Pinterest
Labels: contracts, general, Theory of the firm

There is a new NBER working paper out on the moral hazard effects of corporate social responsibility.


When Corporate Social Responsibility Backfires: Theory and Evidence from a Natural Field Experiment
by John A. List and Fatemeh Momeni

Corporate Social Responsibility (CSR) has become a cornerstone of modern business practice, developing from a "why" in the 1960s to a "must" today. Early empirical evidence on both the demand and supply sides has largely confirmed CSR's efficacy. This paper combines theory with a large-scale natural field experiment to connect CSR to an important but often neglected behavior: employee misconduct and shirking. Through employing more than 3000 workers, we find that our usage of CSR increases employee misbehavior - 20% more employees act detrimentally toward our firm by shirking on their primary job duty when we introduce CSR. Complementary treatments suggest that "moral licensing" is at work, in that the "doing good" nature of CSR induces workers to misbehave on another dimension that hurts the firm. In this way, our data highlight a potential dark cloud of CSR, and serve to forewarn that such business practices should not be blindly applied.

So "doing good" can result in workers "doing bad".
Posted by Paul Walker at 2:35 am No comments: