Has the trade war with China been good for American businesses and consumers? The first results are in, and David Weinstein tells Tim Phillips who the winners and losers are.

Posted by Paul Walker at 2:28 am No comments:

My Blogwatch column from the latest issue (Issue 63, December 2018) of the NZAE magazine Asymmetric Information 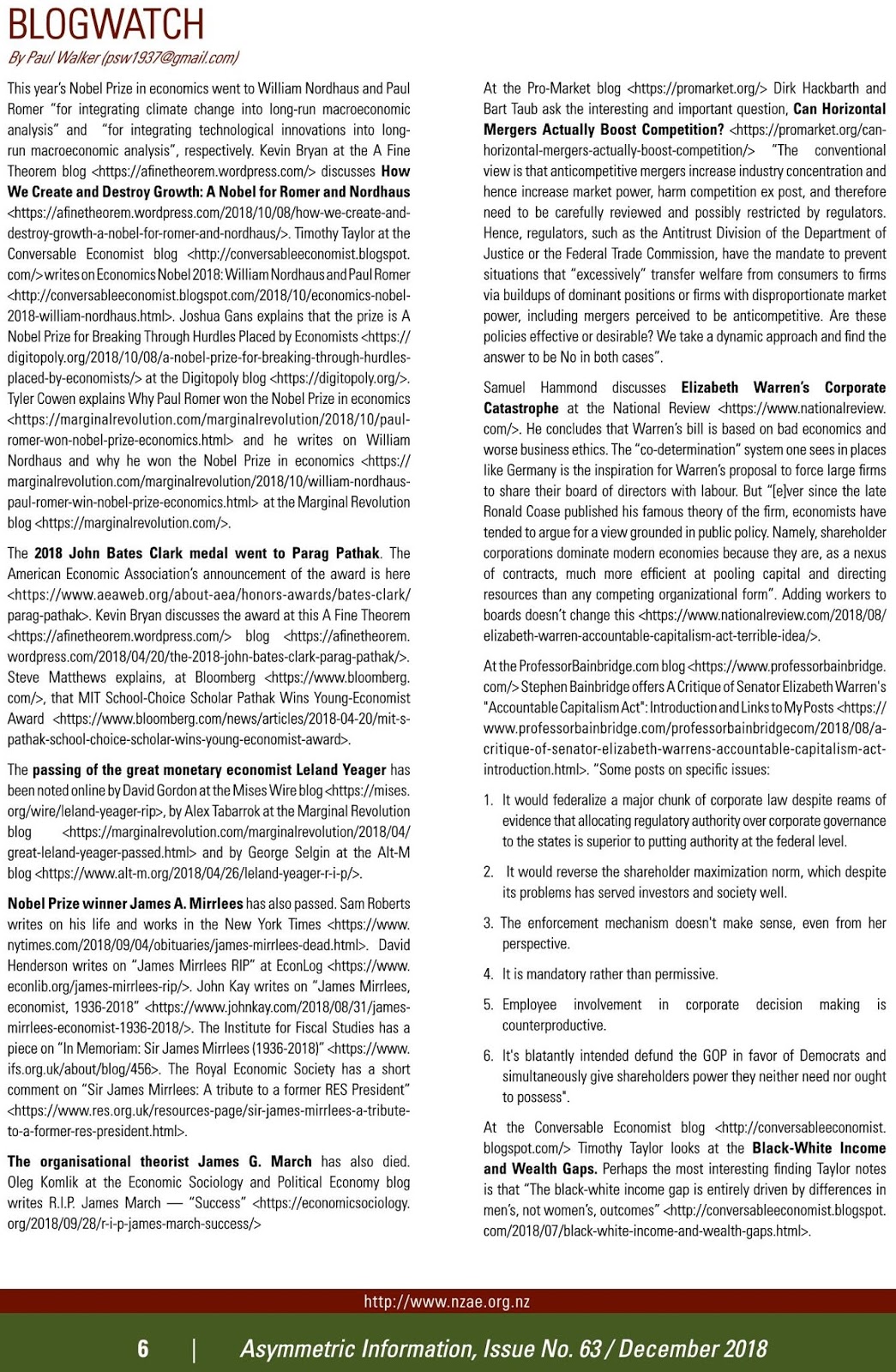 Posted by Paul Walker at 6:03 pm No comments:

Being neoclassical before it was cool to be neoclassical: the case of the theory of the firm

Being neoclassical before i... by on Scribd
Posted by Paul Walker at 12:04 am No comments:

The division of labour and the mainstream theory of the firm

Tyler Cowen (Economics professor, George Mason U.) joins Dave to discuss his new book “Stubborn Attachments: A Vision for a Society of Free, Prosperous, and Responsible Individuals” covering topics like government regulation, why he identifies as a “small L” libertarian, and economic ideas like Universal Basic Income, climate change, the cryptocurrency revolution, his sensible plan for immigration etc.

Posted by Paul Walker at 6:05 am No comments:

The effects of the Australian National Firearms Agreement

There has been, not too surprisingly, much discussion of the government's idea of a compulsory 'gun buyback' scheme, see for example, Peter Cresswell at the Not PC blog. This legislation the Deputy PM says will cost somewhere around $300 million. An obvious question is what will this money buy us?

One way to see the likely outcomes is to look at the effects of the Australian National Firearms Agreement (NFA) introduced after the mass shooting in Port Arthur, Tasmania in 1996. Some studies suggest the effects of the NFA may not have been large. Lee and Suardi (2008), for example, state that


"The 1996-97 National Firearms Agreement (NFA) in Australia introduced strict gun laws, primarily as a reaction to the mass shooting in Port Arthur, Tasmania in 1996, where 35 people were killed. Despite the fact that several researchers using the same data have examined the impact of the NFA on firearm deaths, a consensus does not appear to have been reached. In this paper, we re-analyze the same data on firearm deaths used in previous research, using tests for unknown structural breaks as a means to identifying impacts of the NFA. The results of these tests suggest that the NFA did not have any large effects on reducing firearm homicide or suicide rates."

But there is some evidence that the Australian reforms, as a whole, reduced suicide and homicide rates. Leigh and Neill (2010) say


"In 1997, Australia implemented a gun buyback program that reduced the stock of firearms by around one-fifth. Using differences across states in the number of firearms withdrawn, we test whether the reduction in firearms availability affected firearm homicide and suicide rates. We find that the buyback led to a drop in the firearm suicide rates of almost 80 per cent, with no statistically significant effect on non-firearm death rates. The estimated effect on firearm homicides is of similar magnitude, but is less precise. The results are robust to a variety of specification checks, and to instrumenting the state-level buyback rate".

But you have to be careful with the Australian case as the NFA had several aspects to it, only one of these aspects being a buyback scheme. Leigh and Neill (2010) also say


"Perhaps a more likely explanation of the strength of the relationship found is that the NFA led states with relatively weak legislation or enforcement relating to sale, ownership and storage of firearms to strengthen their regimes relative to states with initially stronger standards. There is evidence that states with relatively high firearm ownership and therefore high gun buyback rates also had relatively weak regulation prior to 1996. Then, our estimates need to be interpreted as reflecting a combination of both the removal of firearms and the relative strengthening of legislation and enforcement. We might expect to see smaller effects in the case of a buyback that was not accompanied by stricter firearm legislation".

Thus there was more going on in the Australian case than just a buyback, and it's difficult to know which bits of the reforms drive the results.

One reason for not rushing into any new legislation is to give time for a proper valuation of the empirical evidence to be done.

Posted by Paul Walker at 5:01 pm No comments: