JS Mill and the firm

For Mill, the number of collective organisations, including firms - both investor controlled and co-operatives, would increase as wealth increases,


"[a]s wealth increases and business capacity improves, we may look forward to a great extension of establishments, both for industrial and other purposes, formed by the collective contributions of large numbers ; establishments like those called by the technical name of joint-stock companies, or the associations less formally constituted, which are so numerous in England, to raise funds for public or philanthropic objects, or, lastly, those associations of workpeople either for production, or to buy goods for their common consumption, which are now specially known by the name of co-operative societies" (Mill 1848: 699).


"Mill clearly formulated the problem of joint production, i.e., production of two or more products in fixed proportions. He gave the complete and correct solution: the sum of the prices of the products must equal their joint cost, and the price of each product is determined by the equality in equilibrium of quantity supplied and quantity demanded" (Stigler 1955: 297).

As to the significance of the scale of production Stigler adds that,


"Mill's chapter (Bk. I, c. IX), " Of production on a large, and production on small, scale", is the first systematic discussion of the economies of scale of the firm to be found in a general economic treatise. It would take us afield to analyse this chapter in detail, but we may point out that Mill was the first economist to notice that one can deduce information on the costs of firms of different sizes from their varying fortunes through time" (Stigler 1955: 298).

Zouboulakis (2015: ???) writes that "[a]mong the advantages of production on a large scale, he [Mill] mentions the more advanced division of labour, the less than proportionate increase of "the expenses of a business”, the greater possibility of investment to "expensive machinery" and ``the saving in the labour of the capitalists themselves" (1848, 132-6)".

Mill also scrutinised the advantages and disadvantages of the joint stock company. "On the one hand, only such a company can afford the amount of capital necessary to build important projects such as a railway, and to guarantee the continuity of such costly and risky business operations such as banking and insurance. On the other hand, he recognizes that "joint stock or associated management" has some disadvantages over ``individual management"" (Zouboulakis 2015: ???). Mill, like Smith, saw the potential for, what today we would call, principal-agent problems in the relationship between the owners and the managers of joint stock companies. The interests of the managers may not be aligned with the interests of the owners. When discussing methods to the alleviate such problems Mill makes the observation that


"[i]n the case of the managers of joint stock companies, and of the superintending and controlling officers in many private establishments, it is a common enough practice to connect their pecuniary interest with the interest of their employers, by giving them part of their remuneration in the form of a percentage on the profits. The personal interest thus given to hired servants is not comparable in intensity to that of the owner of the capital ; but it is sufficient to be a very material stimulus to zeal and carefulness, and, when added to the advantage of superior intelligence, often raises the quality of the service much above that which the generality of masters are capable of rendering to themselves" (Mill 1848: 141).

Interestingly, such observations give Mill more of a proto-modern feel than a proto-neoclassical feel. But, again, like Smith, Mill did not develop his insights into a full-blown theory of the firm.

Posted by Paul Walker at 2:05 pm No comments:

Johnann von Thunen and the (proto)neoclassical theory of the firm

Johnann Theunen has been described as a proto-neoclassical. One reason for this is the, before his time, contribution he made to the theory of the firm. While Dionysius Lardner analysed the firm's output market, Thunen looked at the firm's input markets. He argued that the firm should use inputs up to the point where the value of the marginal product of the input equals the price of that input. His treatment of the issue has become known as the marginal productivity theory of distribution. To illustrate Thunen's argument we will look at the simplest possible model.

We will assume a central marketplace which is surrounded by agricultural land, all of which is of equal fertility. There will be one good, which we call wheat. The landowners hire a single input to production, labour. L units of labour produces W(L) units of wheat. The price of wheat in the marketplace is p while the costs of transporting the wheat to the market is $t per mile per ton. Thus the earnings generated from wheat grown m miles away from the marketplace is p-t.m per ton. Total revenue from the wheat will be W(L).(p-t.m). Assume that the landowner pays workers a wage of w resulting in a total wage bill of w.L. This means that the landowner's profit from producing wheat m miles from the marketplace will be W(L).(p-t. m)-w.L.

Further, assume that the landowner selects L to maximise profits. This results in a problem we can represent mathematically as

Maximising this objective function with respect to L gives the first order condition,

Put more generally, a profit maximising firm will choose the level of an input so that the value of the marginal product of the input equals the price of that input. Therefore, from the point of view of a firm, the theory indicates how many units of a factor it should demand.


[h]is analysis culminates in the perfectly modern statement that net revenue is maximized when each factor is employed to the point at which its marginal value product (Wert des Mehrertrags) is equalized to its marginal factor cost (Mehranfwand). Although the discussion proceeds in verbal terms, illustrated by numerical examples, Thunen correctly points out that the marginal product of a factor is a partial differential coefficient of a multivariable production function. Moreover, apart from clearly recognizing the distinction between fixed and variable factors, and between the average and the marginal returns of a factor, he took great care to define the inputs of capital, labor, and land in strictly homogeneous units, observing that this condition was rarely obtained in practice--this too was literally more than sixty years ahead of his time.

Posted by Paul Walker at 1:57 am No comments:

My Blogwatch column from the latest issue (Issue 61, April 2018) of the NZAE magazine Asymmetric Information. 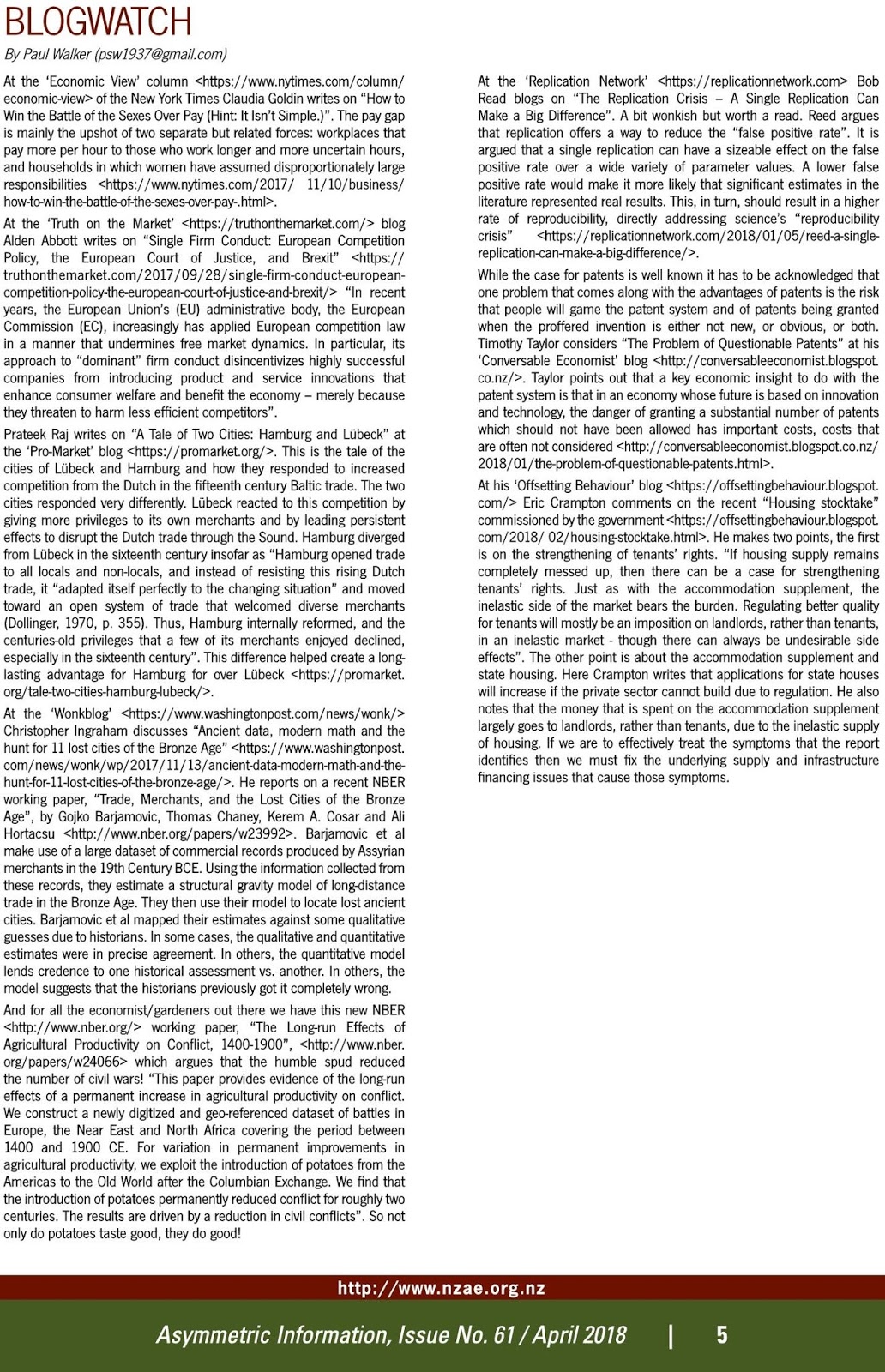 Posted by Paul Walker at 6:41 am No comments:

From David Beckworth’s podcast series, Macro Musings comes this audio of an interview with Sam Hammond on Co-Determination, Corporate Governance, and the Accountable Capitalism Act.

Sam Hammond is a policy analyst and covers topics in poverty and welfare for the Niskanen Center. Sam is a previous guest on Macro Musings, and he joins the show today to talk about his new article in National Review which addresses Senator Elizabeth Warren’s new proposal, the Accountable Capitalism Act, and its potentially negative effects. David and Sam also discuss the problematic stereotypes surrounding ‘corporate bigness’, the positive and negative features of co-determination, and why we need universal safety nets.

Posted by Paul Walker at 1:08 am No comments:

Dionysius Lardner and the theory of the firm

The classical economists did not leave us much in terms of a theory of the firm. But one person who did make a contribution during the later classical era, albeit a contribution largely forgotten now, was Dionysius Lardner. Lardner is part of a group of pre-1870 writers that Ekelund and Hebert (2002) has referred to as "Proto-Neoclassicals". They summarise Lardner's contribution made in his 1850 book Railway Economy as he "[a]nalyzed railroad pricing structures; developed simple and discriminating monopoly analysis; analyzed monopoly firm in terms of total cost and total revenue, both mathematically and graphically (with an implicit demand curve)" (Ekelund and Hebert 2002: Table 1, p. 199).

One important contribution Lardner did make was to foreshadow aspects of the neoclassical theory of the firm. Lardner modelled a profit maximising firm and analysed its choice of price (and thus implicitly quantity) using revenue and cost curves, and implicitly a demand curve. He effectively showed that a profit maximum would occur when "marginal revenue" equals "marginal cost". 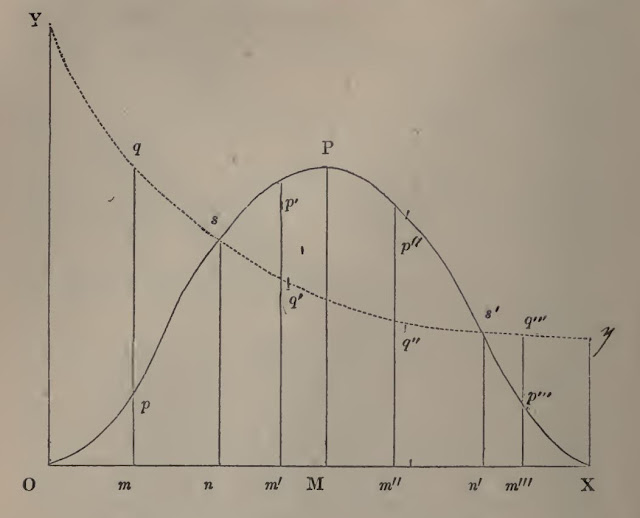 In this Figure, the solid bell-shaped curve is what we would refer to today as a total revenue curve, but where the curve is graphed in revenue/output-price space rather than the standard revenue/quantity space, that is, the horizontal axis measures the price of output. At low prices revenue is also low, but as demand is inelastic revenue increases as price increases. It reaches a maximum, point P in Figure 1, and then as demand becomes more elastic, revenue falls as price continues to increase. While Lardner did not argue explicitly in terms of decreases elasticity, he did come close,


The negatively sloped dashed line, Yy, is the total cost curve, again where the curve is graphed in cost/output-price space rather than cost/quantity space. This explains why the curve is negatively sloped. As the price of output increases the quantity demanded falls, i.e., implicitly Lardner is using a demand curve here, and as quantity falls the variable costs of production fall. Fixed costs, the vertical distance Xy, still needed to be paid. Lardner's cost curve shows total costs, fixed plus variable, declining due to the reduction in variable costs.

Lardner notes that the profit maximising point is to be found somewhere between P and s' in Figure 1, at a point where the vertical height of the revenue and cost curves decrease at the same rate. Fortunately, he then clarifies this by stating,


"[t]his may be geometrically expressed by stating it to be the point at which the two curves become parallel to each other" (Lardner 1850: 292).

Lardner also hints at the advantages of price discrimination, insofar as he sees an advantage to having a lower tariff [price per mile per ton] on longer distances [think, larger quantities of "railway services"]. For example he writes,


"[i]t is clear, therefore, that every reduction which can be made on the tariff affecting the larger class of distances, will have the effect of increasing the area over which the producer can carry on a profitable business, and will proportionally increase the available traffic of the railway. For lesser distances, the reduction of the tariff will only have the effect of augmenting the quantity of the articles transmitted, and this can only be effected in the proportion in which the reduction of the tariff can effect a diminution of price in the market.

A due consideration of these circumstances will easily demonstrate the advantage which must result to the railways from such a graduated tariff as would favour transport to greater distances, [ \dots ]" (Lardner 1850: 299)

and he also said,


"[i]t follows, therefore, that for traffic generally, but more especially for every description of merchandise and of live stock, a tariff graduated upon the principle of diminishing as the distance transported increases, must be the source of largely augmented profits, [ \dots ]" (Lardner 1850: 301)

All this explains why Mark Blaug can write that Railway Economy is "a book containing the first exposition in English of what approximates to the modern [neoclassical] theory of the firm" (Blaug 1997: 293).

Posted by Paul Walker at 7:59 pm No comments:

The development of agriculture

From the History of the World podcast comes these two podcasts on the development and spread of farming.

Posted by Paul Walker at 3:11 pm No comments: