Climate shock: the economic consequences of a hotter planet

See here for a short audio, from VoxEU.org, of Gernot Wagner being interviewed by Romesh Vaitilingam on "Climate shock: the economic consequences of a hotter planet".


At the heart of policy debates about our collective responses to climate change is the issue of risk and uncertainty - ‘unknown unknowns’ about the impact of global warming. In this Vox Talk, Gernot Wagner - co-author with Harvard’s Martin L. Weitzman of 'Climate Shock: The Economic Consequences of a Hotter Planet’ - argues for Pigovian taxes and carbon pricing, against geoengineering solutions, and why 'we need to stick it to CO2, not to capitalism’.

Email ThisBlogThis!Share to TwitterShare to FacebookShare to Pinterest
Labels: audio/video

In February 2015 the Indiana University Maurer School of Law Bloomington hosted the Vincent and Elinor Ostrom Memorial Lecture with Barry R. Weingast (Ward C. Krebs Family Professor, Dept. of Political Science, Stanford University and a Senior Fellow, Hoover Institution) who spoke on “The Violence Trap: Why Democracy and Rule of Law Fail in the Developing World.”

Posted by Paul Walker at 6:19 pm No comments:

Email ThisBlogThis!Share to TwitterShare to FacebookShare to Pinterest
Labels: audio/video

Productivity, and the reasons why some countries are more productive than others is an issue of long-standing interest to economists. Cross-country differences in productivity are pondered over and worried about in the policy circles of most countries, including New Zealand. A new column at VoxEU.og, by Nezih Guner, Andrii Parkhomenko and Gustavo Ventura, attempts to dig a little deeper in to the issue, looking into differing managerial quality between different nations. In high-income countries, the mean earnings of managers tend to grow faster than for non-managers and the earnings growth of managers relative to non-managers corresponds to output per worker. To understand why countries like Italy (and New Zealand?) lag behind the US in terms of output per worker, they argue we should take into account that there are more incentives to invest in managerial skills in the US.

The modelling approach taken in the column is described as


In order to understand and draw implications from our empirical findings, we study a span-of-control model with a life-cycle structure. Every period, a large number of finitely lived agents are born. These agents are heterogeneous in terms of their initial endowment of managerial skills. The objective of each agent is to maximise the lifetime utility from consumption. In the first period of their lives, agents make an irreversible decision to be either workers or managers. In the model economy, differences in managerial quality emerge from differences in selection into management work, along the lines of Lucas (1978), and differences in skill investments, as we allow for managerial abilities to change over time as managers invest in their skills. Hence, we place incentives of managers to invest in their skills and the resulting endogenous skill distribution of managers at the centre of income and productivity differences across countries.

In the model economy, skill investment decisions reflect the costs (resources that have to be invested rather than being consumed) and the benefits (the future rewards associated with being endowed with better managerial skills). Since consumption goods are an input for skill investments, a lower level of aggregate productivity results in lower incentives for managers to invest in their skills. Furthermore, managers face potential size-dependent distortions as in the literature on misallocation in economic development. We model size-dependent distortions as progressive taxes on the output of a plant, and do so via a simple parametric function that was proposed originally by Benabou (2002).

Size-dependent distortions have two effects in our setup.

Overall, under higher exogenous productivity and smaller distortions, managers invest more in their skills in equilibrium and operate larger and more productive plants. As a result, both output per worker and the gap between the earnings of managers to non-managers become larger, in line with the cross-country evidence presented in Figure 1

Figure 1. Cross-country relationship between output per worker and lifetime growth of managers’ earnings relative to non-managers 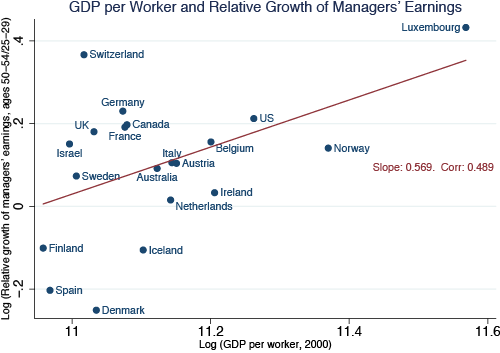 
[...] we contend that in order to understand why countries like Italy and others lag behind the US in terms of output per worker, we should take into account that in the US, the incentives to invest in managerial skills are not as distorted. A young person who contemplates a managerial career takes into account distortions (regulations and other factors that act as implicit size-dependent taxes) that he or she will face when earning a higher compensation as a manager. In economies with larger distortions, individuals will either invest less in their managerial skills or choose a non-managerial career. In equilibrium, these reactions lead to lower managerial quality and output per worker, and to lower earnings growth of managers relative to non-managers, as the data indicates.

Posted by Paul Walker at 6:01 pm No comments:

Apple vs the feds: fhe facts

All this article from NetGuide makes interesting reading. But the most relevant point made is I think this one:


So Apple’s strongly worded response to the court order could have more to do with public relations and commercial fallout as it does with customer protection.

This isn't all that surprising as none of this is likely to be terribly palatable for Apple who’ll foot the bill for complying with the court order. While the costs of doing so are likely to be peanuts in the grand scheme of things, it’ll also do Apple no favours In an ultra-competitive smartphone marketplace, where any perceived weakness such as the feds being able to snoop through a phone could be exploited by competitors to turn potential buyers away from IOS.

In short, consumers don't want a phone from a company which will help the Feds break into it. Consumers value privacy and Apple have worked this out and responded accordingly. Competition, if not a genuine belief in liberty, forced Apple to the right decision.
Posted by Paul Walker at 5:49 pm No comments:

Email ThisBlogThis!Share to TwitterShare to FacebookShare to Pinterest
Labels: general

The funniest papers in the history of economics