Peter Navarro's very strange views on trade have been attacked by many economists, from all parts of the political spectrum, recently. Diego Zuluaga offers some empirical background to the attacks on Navarro at the IEA's blog.


Here I intend to give some empirical texture to the rebuttal, by showing the relationship between current account deficits – the number that Navarro thinks we should be worried about – and growth rates – which Navarro claims would increase if the U.S. cut said deficits – in four representative countries.

The four charts below depict current account deficits and growth for the U.S., Mexico, the UK and Germany, from left to right and top to bottom. The reason I picked those countries is that they are the most likely to be mentioned in present discussions around trade. Furthermore, the UK is often said to suffer from a chronic current account deficit, whilst Germany is increasingly chastised for its large current account surplus which is alleged to benefit her at the expense of other Eurozone economies. 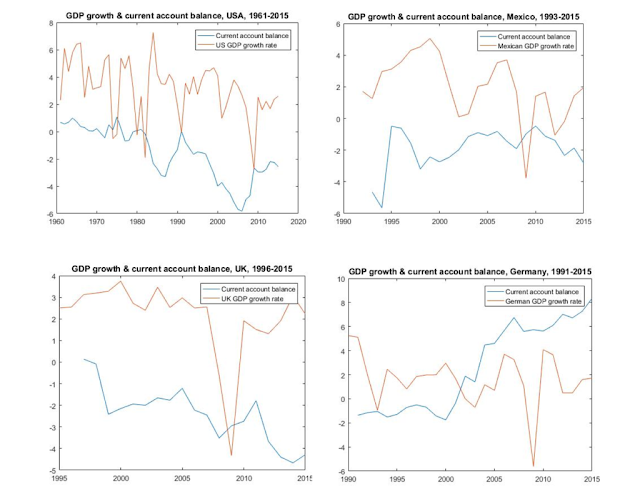 A number of observations can be made in light of the data above. Firstly, rather than there being a negative relationship between current account deficits and growth rates, the arrow seems to point in the opposite direction: the larger the deficit, the higher the growth rate. This should not come as a surprise. The healthier an economy, the more likely households are to spend and businesses to invest, using both domestic and foreign goods and services in the process. Moreover, a growing economy attracts foreign capital and, since the current account balance is always matched by a balance with the opposite sign on the capital account, this means that, the more foreigners invest in a country, the more that country will import in goods and services.

We can conclude that the historical record suggests that the relationship between deficits in traded goods and services, and the growth rate of the U.S. economy is almost exactly the opposite of the one Navarro tries to defend.
Posted by Paul Walker at 3:34 am