What problems and opportunities are created by tax havens?

A question asked in an article, with the same title, in the journal Oxford Review of Economic Policy, Volume 24, Issue 4 Winter 2008, pp. 661-679. The article is by Dhammika Dharmapala.


Tax havens have attracted increasing attention from policy-makers in recent years. This paper provides an overview of a growing body of research that analyses the consequences and determinants of the existence of tax-haven countries. For instance, recent evidence suggests that tax havens tend to have stronger governance institutions than comparable non-haven countries. Most importantly, tax havens provide opportunities for tax planning by multinational corporations. It is often argued that tax havens erode the tax base of high-tax countries by attracting such corporate activity. However, while tax havens host a disproportionate fraction of the world's foreign direct investment (FDI), their existence need not make high-tax countries worse off. It is possible that, under certain conditions, the existence of tax havens can enhance efficiency and even mitigate tax competition. Indeed, corporate tax revenues in major capital-exporting countries have exhibited robust growth, despite substantial FDI flows to tax havens.

Importantly Figure 1 from the paper lists the tax havens around the world. The interesting thing to notice is who isn't on the list. 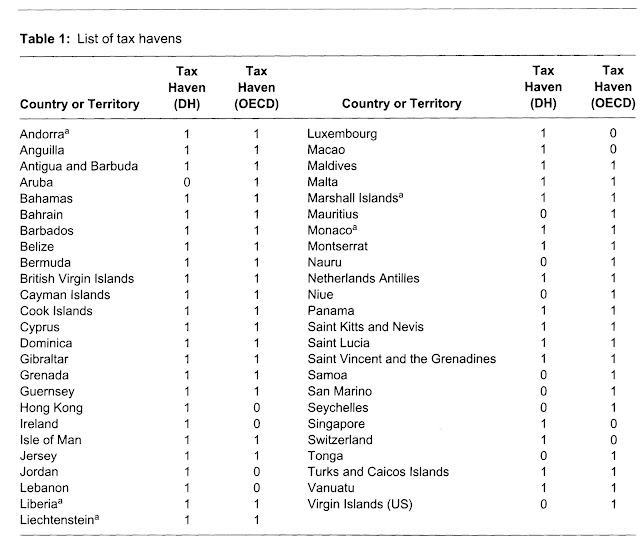 Tax haven (DH)' refers to the definition of tax havens used in Dharmapala and Hines (2006). Tax haven (OECD)' refers to the definition of tax havens in OECD (2000, p. 17), but includes an additional six countries (listed in Hishikawa, 2002, p. 397, fn 72) that otherwise satisfied the OECD's tax haven criteria but were not included on the list because they provided 'advance commitments' to eliminate allegedly harmful tax practices. In each case, 1 = tax haven and 0 = non-haven.


An intriguing finding from the literature surveyed in the paper is that tax havens tend to have stronger governance institutions (i.e. better political and legal systems and lower levels of corruption) than comparable non-haven countries. Also while many people would argue that tax havens erode the tax base of high-tax countries, the paper stresses a more 'positive' view of havens. This view suggests that, under certain conditions, the existence of tax havens can enhance efficiency and even mitigate tax competition. Such a view appears to be supported by recent experience with corporate tax revenues: despite substantial FDI flows to tax havens, corporate tax revenue in major capital-exporting countries has increased.

Such findings may come as a surprise to many of those shouting their keyboards off about the Panama Papers. But I'm sure it will do little to change their views.