What are the employment effects of minimum wages?

This question is discussed in a new article from IZA World of Labor. The article is Employment effects of minimum wages by David Neumark (University of California—Irvine, USA, and IZA, Germany).

There is no such thing as a free lunch, and this applies to the minimum wage as much as to anything else. The potential upside is higher wages for affected workers, the downside fewer workers could be employed. In policy terms there is a trade-off between these two effects.

Although a minimum wage policy is intended to ensure a minimal standard of living, unintended consequences undermine its effectiveness. Widespread evidence indicates that minimum wage increases are offset by job destruction. Furthermore, the evidence on distributional effects, though limited, does not point to favorable outcomes, although some groups may benefit.

Neumark's discussion of the evidence on the employment effects of the minimum wage is:

Through the 1970s, many early studies of the employment effects of minimum wages focused on the US. These studies estimated the effects of changes in the national minimum wage on the aggregate employment of young people, typically 16−19-year- olds or 16−24-year-olds, many of whom have low skills. The consensus of these first- generation studies was that the elasticities for teen employment clustered between −0.1 and −0.3 [1].

Limited evidence from the 1990s challenged this early consensus, suggesting that employment elasticities for teenagers and young adults were closer to zero. But even newer research, using more up-to-date methods for analyzing aggregate data, found stronger evidence of disemployment effects that was consistent with the earlier consensus. Using data through 1999, the best of these studies found teen employment elasticities of −0.12 in the short run and −0.27 in the longer run, thus apparently confirming the earlier consensus: Minimum wages destroy the jobs of young (and hence unskilled) people, and the elasticity ranges between −0.1 and −0.3.

In the early 1990s, a second, more convincing wave of research began to exploit emerging variation in minimum wages across states within the US. Such variation provides more reliable evidence because states that increased their minimum wages can be compared with states that did not, which can help account for changes in youth employment occurring for reasons other than an increase in the minimum wage. A related literature focuses on specific cases of state minimum wages increases. This case study approach offers the advantage of limiting the analysis to a state where the minimum wage increases and another very similar state that is a reasonable comparator. Unfortunately, these results do not necessarily apply in other states and other times.

An extensive review of this newer wave of evidence looked at more than 100 studies of the employment effects of minimum wages, assessing the quality of each study and focusing on those that are most reliable [2], [3]. Studies focusing on the least skilled were highlighted, as the predicted job destruction effects of minimum wages were expected to be more evident in those studies. Reflecting the greater variety of methods and sources of variation in minimum wage effects used since 1982, this review documents a wider range of estimates of the employment effects of the minimum wage than does the review of the first wave of studies [1].

One potential exception is an investigation of New Jersey’s 1992 minimum wage increase that surveyed fast-food restaurants in February 1992, roughly two months before an April 1992 increase, and then again in November, about seven months after the increase [4]. As a control group, restaurants were surveyed in eastern Pennsylvania, where the minimum wage did not change. This allowed comparing employment changes between stores in New Jersey and Pennsylvania. The results consistently implied that New Jersey’s minimum wage increase raised employment (as measured by full-time equivalents, or FTEs) in that state. The study constructed a wage gap measure equal to the difference between the initial starting wage and the new minimum wage for fast-food restaurants in New Jersey and equal to zero for those in Pennsylvania. The increase had a positive and statistically significant effect on employment growth in New Jersey (as measured by FTEs), with an estimated elasticity of 0.73. Note that the study did not, as is often claimed, find “no effect” of a higher minimum, but rather a very large positive effect.

A reassessment of this evidence looked at the unusually high degree of volatility in the employment changes found in the data [5]. The new study collected administrative payroll records from fast-food establishments in the same areas from which the initial study had drawn its sample. In the initial survey, managers or assistant managers were simply asked, “How many full-time and part-time workers are employed in your restaurant, excluding managers and assistant managers?” [4]. This question is highly ambiguous, as it possibly refers to the current shift, the day, or the payroll period. In contrast, the administrative payroll data clearly referred to the payroll period. Reflecting this problem, the initial survey data indicated far greater variability than the payroll records did, with some implausible changes.

The current summary differs from many other brief synopses of minimum wage studies, which often point out that some studies find negative effects and others do not. The studies reporting positive or no effects are often given too much weight. Studies suggesting that “we just don’t know” often summarize the literature by citing one or two studies finding positive effects, such as [4], along with a couple of studies reporting negative effects, suggesting that one should not confidently hold the view that minimum wages reduce employment. However, the piles of evidence do not stack up evenly: The pile of studies finding disemployment effects is much taller.

The large review of minimum wage studies also highlights some important considerations when assessing the evidence on minimum wages [2]. First, case-study analyses may cover too little time to capture the longer-run effects of minimum wage changes. Second, case studies focusing on a narrow industry are hard to interpret, since the standard competitive model does not predict that employment will fall in every narrow industry or subindustry when an economy-wide minimum wage goes up.

This view of the overall lessons to be drawn from the large body of research on minimum wages has been contested in a review from 2013 [6], drawing in part on previous meta-analysis. The review uses the estimates displayed in Figure 1 in that meta-analysis to suggest that the best estimates are clustered near zero. However, the figure includes a pronounced vertical line at a zero minimum wage-employment elasticity, creating the illusion that the estimates are centered on zero. This illusion is perhaps further enhanced by including studies with elasticities ranging from nearly −20 (that is, 100 times larger than a −0.2 elasticity) to 5, making it hard to discern whether the graph’s central tendency is closer to 0, −0.1, or −0.2, which is the relevant debate. In fact, the previous meta-analysis reports that the mean across the studies summarized in the graph is −0.19.

Moreover, applying meta-analysis to minimum wage research is problematic. Meta-analysis treats all studies as equally valid, aggregating them to estimate an overall effect. This approach is intuitively appealing for combining estimates from similar experiments that differ mainly in the samples studied, because it turns many small samples into one large one. However, combining minimum wage studies without taking into account the variations in the reliability of their methods and in the groups of workers studied compromises the findings of such meta-analysis.

Two recent revisionist studies find no detectable employment losses from US minimum wage increases [7], [8]. These studies argue that higher minimum wages were adopted in states where the employment of teenagers and other low-skill workers was declining because of deteriorating economic conditions generally, so the negative relationship does not necessarily imply a negative causal effect.

Moreover, a review of the two studies finding no detectable employment losses finds that their conclusions are not supported by the data. The review suggests that the data show elasticities nearer to –0.15 for teenagers and some signs of negative employment effects for restaurant workers, although other factors make this hard to estimate [10]. The review concludes that elasticities of employment for groups strongly affected by minimum wage policies are in the range found by many earlier researchers, from –0.1 to –0.2. 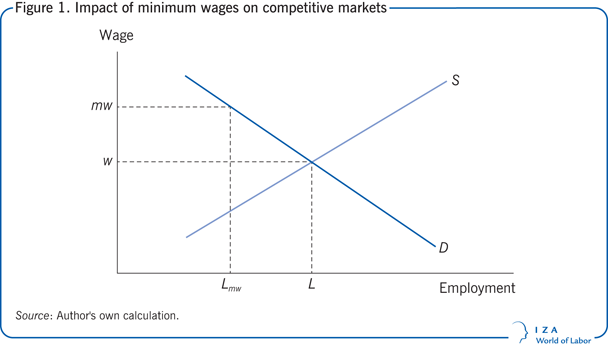 References and much additional discussion of the theory of the minimum wage, the distributional effects, the limitations of and gaps in our understanding of the effects of a minimum wage, along with a summary and policy advice can be found in the paper. Well worth a read.
Posted by Paul Walker at 10:27 am