Are foreign takeovers getting domestic cherries or lemons?

The concerns of economic nationalists - read NZ First, the Conservatives, Labour etc in the case of New Zealand - about foreign takeovers of assets, including land, are rooted in the idea that foreign enterprises extract the most valuable assets from top performing domestic firms. This argument puts to one-side for now the ever present xenophobia which underlies much of the anti-foreign investment rhetoric in New Zealand. Practical concerns about economic efficiency of cross-border mergers and acquisitions markets hinge on whether takeovers transfer underperforming domestic economic resources toward more productive uses at foreign enterprises. How then to reconcile these concerns when forming policies about cross-border activity? Well in a new column at VoxEU.org Farid Toubal , Bruce Blonigen, Lionel Fontagné and Nicholas Sly argue it’s all in the timing.

One of the big questions about foreign investment is are the foreign firms picking cherries or choosing lemons?


For many years the evidence about targets of foreign acquisitions has been mixed. Some theories and data suggest that ‘lemons’ – domestic firms with relatively weak performance – are the most likely targets of foreign acquisition. Yet more recent empirical studies have pointed to ‘cherries’ as the most likely targets for takeover by foreign firms. The disagreement about which type of domestic firms – cherries or lemons – are pursued by foreign enterprises made it difficult to answer policy makers’ question about which of their assets, economic networks, and production possibilities were suddenly in the hands of foreign ownership.

The doubt over which types of firms were being acquired also raises concerns about the efficiency of international merger and acquisition (M&A) markets. Ideally, market transactions should transfer resources toward their most efficient use. The same holds for M&A markets, which should transfer the assets of lesser performing firms to enterprises that can make better use of them. If domestic firms are high performing cherries, it is not evident that a transfer of ownership of their resources to a foreign enterprise is optimal; being a cherry implies that a domestic firm is already using its resources effectively. Poor performing lemons might seem to fit the bill. Yet the question remains open as to why a foreign enterprise would choose to enter a market using resources that even a domestic firm – which had more familiarity with resident consumers, regulations, and distribution networks – could not use profitably.

Blonigen, Fontagne, Sly, and Toubal argue its all in the timing.


In Blonigen, Fontagne, Sly, and Toubal (2014), we show that the conundrum over whether domestic cherries or lemons are targets of acquisition can be resolved by considering not only the types of assets that foreign acquirers seek, but also the timing of takeovers. Indeed, foreign firms seek domestic targets that are historically high performing. In fact, when we look at foreign acquisitions that occur in the French manufacturing sector over the last decade, we find that even the least productive domestic target outperforms the typical firm in its sector in the years prior to acquisition. See Figure 1 below, which takes advantage of detailed administrative data from France to illustrate systematic changes in firm characteristics as they transition from domestic to multinational status. We plot total factor productivity (TFP) for all manufacturing firms that are acquired by foreign owners between 1999 and 2006 relative to sector and year averages, from three years prior to the acquisition to four years after the firm is acquired. The middle line shows the relative detrended TFP for the average French firm acquired by a foreign owner, whereas the lines above and below show the relative detrended TFP for the 95th and 5th percentiles, respectively. In the years prior to acquisition, domestic targets of foreign acquisition do appear to be ‘cherries.’ They have all a TFP that is above industry-year average. 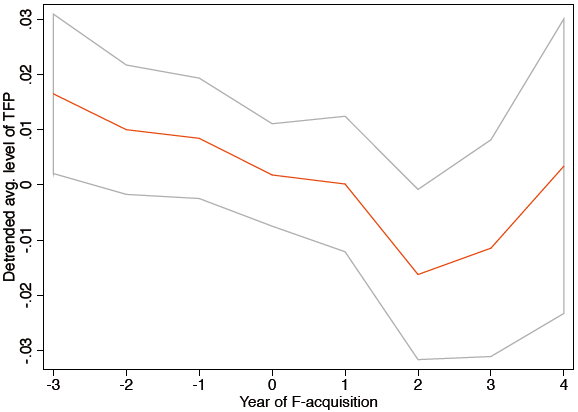 Yet despite the high performance of target firms observed several years prior to acquisition, Figure 1 shows that, prior to acquisition, targets realize significant productivity losses relative to other firms in their sector. The losses in productivity are so severe that by the time they are acquired, targets of foreign acquisition no longer appear to be cherries; on average they are indistinguishable from the typical firm from their sector. Put differently, in the years leading up to acquisition domestic targets are underperforming relative other firms in their industry. In these years, targets do look like ‘lemons.’

Rather than targets of foreign acquisition being characterized purely as top performers or underperformers in the market place, foreign enterprises seek out domestic firms that were previously the stars of their industries but then suffered a recent series of negative shocks. Hence, the targets of foreign takeovers are ‘Cherries for Sale.’

This timing of cross-border acquisition activity is quite intuitive. Foreign enterprises seek out targets that have the best and most valuable assets. And not surprisingly, it is the most productive target firms that had the largest incentives to invest in developing such assets. However, foreign enterprises can only offer viable takeover bids once the domestic firm has suffered a turn in fate, and is underutilizing it valuable assets. In this case it is better for the domestic firm to sell its assets to a foreign acquirer that can make better use of them.

So what is the upshot of all of this?


This timing of takeover activity implies that policy makers should have fewer concerns about relinquishing national ownership of its domestic enterprises, as the ‘Cherries for Sale’ are no longer the best and most valuable economic agents within their economic sectors. The observed timing of takeover activity also suggests the efficiency of cross-border M&A markets. Cross-border acquisitions appear to transfer productive assets, technologies, and distribution networks toward enterprises that can make better use of these valuable resources.

So foreign ownership may be good for you after all. The assets being bought by the foreign companies are those not preforming well under their current owners and the foreign owners can make better use of those assets. This is a gain for the local economy.

Thanks Paul for the drawing my attention to this. Very useful.

By and large the winning bidder is the would-be buyer who thinks they can make the most value of the asset at hand.

The case of foreign investment, it's an obvious form of technological diffusion - a way of spreading entrepreneurial skill and trade secrets over a larger asset base.