Why it matters who leads research universities

Amanda Goodall has a interesting column at VoxEU.org on the topic of Why it matters who leads research universities. Goodall argues that the top European research universities underperform compared to their American counterparts. The evidence is summarised with policy recommendations by van der Ploeg and Veugelers (2008a,b). These authors raise the need for improved governance, in particular that governments should give universities greater autonomy to manage their own affairs. Leadership is an important part of governance, and again, in Goodall's view, Europe lags. US universities choose different types of leaders; indeed, as she argues, the achievement of America’s top institutions today may be explained partially by the legacy of outstanding scholars who have led them.

The top research universities in the world are overwhelmingly located in the US (Jacobs and van der Ploeg 2006; Goodall 2006). US institutions also house most Nobel Prize winners. A further difference between the US and Europe is that many of America’s great universities are also led by their best researchers.

Could it be that having a distinguished scholar as leader improves the performance of universities?

Using the Shanghai Jiao Tong global league table, Figure 2 shows the average lifetime citations (normalised for discipline) of each president by the position of their university in the ranking. The 100 universities are grouped into quintiles (the ‘1-20’ group refers to the top of the Shanghai Jiao Tong table, where 1 is Harvard). As can be seen there is a clear monotonic decline – the higher the university is placed in the global ranking, the higher are the lifetime citations of its leader (Goodall 2006, 2009b). In other words, better universities appear to hire better scholars to lead them. 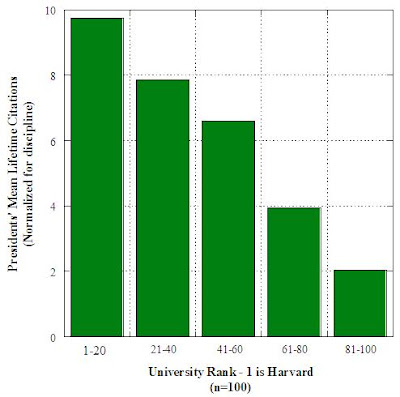 The important question is, Which way does the causation flow? Goodall writes, 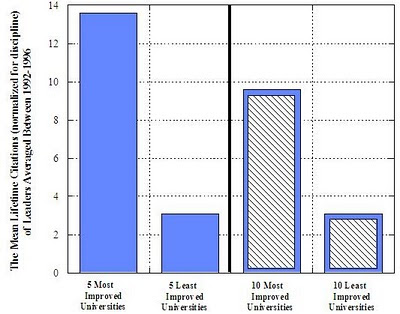 From all of this comes an obvious question, Why might top scholars improve university performance? Goodall discusses four reasons,

First, a president (vice chancellor, rector, principal) who is a distinguished scholar will have a better understanding of the core business of a university, that of research and teaching. This is key to the idea (promoted in Goodall 2009) of “expert leadership”, that in organisations where the core business relies on expert knowledge – for example, law and accounting firms, in R&D, management consultancies, and architecture practices – the leader must first be an outstanding expert in the relevant area of business. This particularly challenges the ideas of managerialism that would appear to promote management skills above expert knowledge. Arguably, top scholars, engineers or lawyers must also have management and leadership skills, and in my dataset of 400, almost all the leaders had progressed through managerial hierarchies in their institutions prior to the top job.

A second explanation raised by interviewees, one that again relates to expert knowledge, is that a scholar-leader will likely demand higher academic standards. Arguably, it is leaders who should set the standards in any organisation. This message is articulated by a dean in one of my interviews, “leaders are the final arbiters of quality. Therefore it is right to expect the standard bearer to first bear the standard”. A number of UK vice chancellors said that it was easier to encourage others to submit articles to top journals for the Research Assessment Exercise if they had done so themselves.

Top scholars send out important signals to a number of audiences, according to interviewees. They signal a university’s priorities, act as a beacon when hiring other outstanding academics, and are attractive to students and donors. Finally, it was suggested that scholars are more credible leaders. A president who is a researcher will gain greater respect from academic colleagues and appear more legitimate. Legitimacy extends a leader’s power and influence.

The last section of Goodall's column asks an interesting question, at least to me: How do economists fare as leaders?

Many years ago, humanists dominated as university heads. Today they have largely been replaced by scientists and social scientists, among whom economists are a rising force. One of the most successful, and arguably most influential, presidents of the 20th Century was the distinguished labour economist Clark Kerr, former Chancellor of Berkeley and the founding president of the University of California, who is often credited with its success. Indeed, labour economists are the largest group within the discipline, possibly because empirical work is more helpful in these roles than theory. Two retired economists recognised as having made an important contribution are William Bowen, former president of Princeton and the Mellon Foundation, and Henry Rosovsky, who was an influential dean of the Faculty of Arts and Sciences at Harvard, although he stopped short of becoming a president.

Lawrence Summers was one of the most distinguished scholars at the head of the Top-100 universities in the ranking mentioned above. When I present this work in seminars, the former Harvard president is often mentioned – “he was a top scholar who failed”. But my response to this question is that Summers spent many years in Washington DC prior to becoming Harvard’s president, and unquestionably the world of politics is played differently to that of academe. Summers may have been out of touch with the norms and values of the academy. In my interviews at Harvard, many reported that Summers, despite being controversial and short-lived, had developed a powerful intellectual vision for the institution and been a good fundraiser, although it is fair to say he may not have been a good manager of people.

The longest tenured Ivy League president, Richard Levin at Yale, is also an economist. At Bocconi University in Milan, one of Italy’s top institutions, Guido Tabellini has become rector. Tabellini is a highly cited economist, as is Kim Clark, former dean of Harvard Business School, now president of Brigham Young University. George Bain, another labour economist, is credited with raising the research performance of Queens University in Belfast, and before that he was both dean of Warwick Business School and London Business School. A number of business school deans are economists – Glenn Hubbard at Columbia, Rich Lyons at Berkeley’s Haas, Laura Tyson formerly at London Business School, and David Begg at Imperial. It has been difficult for business school deans to make the jump to university president. But the tide may be turning, and if so, more economists, preferably top economists, will likely take the helm at universities.

Question to self: Should I point all of this out to the non-academic economist VC of this university? Hmmmmmm

References:
Posted by Paul Walker at 8:17 am