Below I have reproduced a diagram and explanation from a posting - Padding pockets, not houses - by Marty G at The Standard. 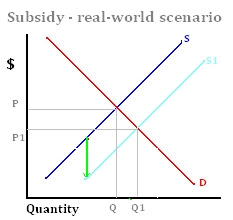 In the real world, it’s different. A new supply curve (S1) can be plotted that is the amount of the subsidy below the original supply line. Where the new supply line intersects with D gives the new level of price and quantity – note, it’s not as low as the full subsidy and quantity is less than what would be demanded if the full subsidy was passed on. (emphasis added)

What is wrong with Marty G's analysis? In short, S1 is not, as he claims, a supply curve.

I have redrawn Marty G's diagram below with an extra point on it, P2. Let us assume that we are at the new equilibrium P1,Q1. At this point the quantity traded is Q1 and the price paid by the consumer is P1. Question: If Q1 is to be supplied, what price must the producer receive? We know that the consumer price and the producer price must differ by the amount of the subsidy and that the consumer pays P1. Thus the producer receives P1 + the subsidy, which equals P2 on my diagram. But note that the P2,Q1 combination corresponds to the curve S, NOT the curve S1. That is, to induce the firm to supply an amount Q1 it must receive the price P2. Therefore S is the supply curve after the subsidy is introduced, as well as before it is. But if S is the supply curve both pre and post subsidy, then S1 is NOT the supply curve in either case. That is, the supply does not move with the introduction of the subsidy. 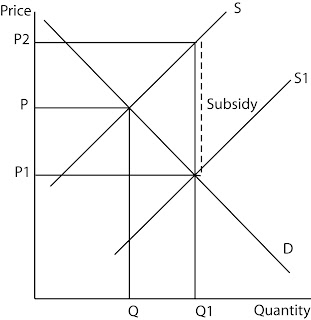 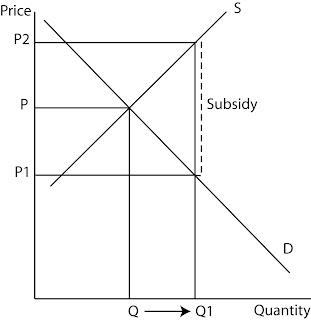 Update: Matt Nolan over at TVHE has some additional issue with Subsidises and complaints.
Posted by Paul Walker at 2:19 pm

heh heh heh so many reasons why I prefer reading this blog, but this post adds to those reasons.

PS more of this please - NZ public needs more of this information, yourself, Eric and Matt Nolan are adding credit to the economics profession. Hopefully in the resulting professional goodwill spillover you have been able to capture a slice that rewards your work :)

Technically, you are both right. How can this be? Well, it depends on how you model the subsidy. Let me explain:

That said, consider a subsidy that is given directly to the producer. This subsidy can be viewed as a lowering of (net) input costs, since the government is kicking in the subsidy to cancel out some of the cost of labor and capital and such. Since input prices are a determinant of supply, you could also argue that the supply curve does in fact shift.

This is largely a question of semantics, since the market outcome is the same regardless of how the subsidy is modeled. The important point, as you said, is that the producers and consumers share the benefit of the subsidy. Another important point, I would argue, is that it costs the government more to fund the subsidy than consumers and producers benefit from it. (In other words, subsidies result in deadweight loss in otherwise well-functioning markets.)

Ask this: Which curve do you use to workout producer surplus? S or S1. If S1 is the supply curve then you should use that.

Your second point is correct. If the subsidy is paid on an input to production then it will affect the MC of the producer and this will shift the supply curve. But when the subsidy is paid on the price of the output it effects the revenue side of the profit function and not the cost side which means the MC curve is unaffected. And thus supply does not move.

Actually I always think a good exam question would be getting students to work through these two cases. The end result should be the same but the logic of getting there will be different.

I totally argue on the deadweight loss bit. But there are votes in subsides so public choice comes into play.

All this theory is really applicable, when the supplier must actually produce what he is demanded, he can do it in a short time to quickly satisfy demand, and he can use price to calculate that demand. In the case of houses(or CARS, for the matter), there is almost no additional supply in the short run (a vertical supply curve).

Then, the price variations because of the subsidy do not affect supply, but only demand, and the equilibrium is moved because more demand appears, as buyers that could not or would not do it otherwise, appear as market players. The effect of the subsidy is to lower the price for the buyer, while keeping the price intact for the supplier.

See what happenned with CARS... The existing inventory was sold, and now car companies have to produce more cars, which will probably not be there for some time. The effect of the subsidy was to liquidate the existing inventory, but we do not know what the effect will be on future demand. Probably the same with houses, and anything that needs more than a couple of weeks to be manufactured and distributed.