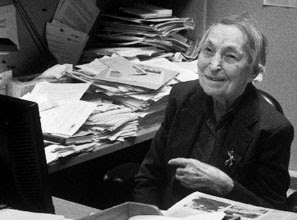 Anna Schwartz was born in 1915 in New York, but despite this fact she can still be found nearly every day at her office in the National Bureau of Economic Research where she has been tirelessly working, gathering data, since 1941.

Guy Sorman has an article on Schwartz in the Spring 2009, vol. 19 no. 2, issue of City Journal. He calls the article Monetarism Defiant: Legendary economist Anna Schwartz says the feds have misjudged the financial crisis.

This lesson of the recent past seems all but forgotten, Schwartz says. Instead of staying the monetarist course, Volcker’s successor as Fed chairman, Alan Greenspan, too often preferred to manage the economy—a fatal conceit, a monetarist would say. Greenspan wanted to avoid recessions at all costs. By keeping interest rates at historic lows, however, his easy money fueled manias: first the Internet bubble and then the now-burst mortgage bubble. “A too-easy monetary policy induces people to acquire whatever is the object of desire in a mania period,” Schwartz notes.

Greenspan’s successor, Ben Bernanke, has followed the same path in confronting the current economic crisis, Schwartz charges. Instead of the steady course that the monetarists recommend, the Fed and the Treasury “try to break news on a daily basis and they look for immediate gratification,” she says. “Bernanke is looking for sensations, with new developments every day.”

On Ben Bernanke Schwartz is also quoted as saying,

Bernanke is right about the past, Schwartz says, “but he is fighting the wrong war today; the present crisis has nothing to do with a lack of liquidity.”

Sorman goes on to write,

President Obama’s stimulus is similarly irrelevant, she believes, since the crisis also has nothing to do with a lack of demand or investment. The credit crunch, which is the recession’s actual cause, comes only from a lack of trust, argues Schwartz. Lenders aren’t lending because they don’t know who is solvent, and they can’t know who is solvent because portfolios remain full of mortgage-backed securities and other toxic assets.

To rekindle the credit market, the banks must get rid of those toxic assets. That’s why Schwartz supported, in principle, the Bush administration’s first proposal for responding to the crisis—to buy bad assets from banks—though not, she emphasizes, while pricing those assets so generously as to prop up failed institutions. The administration abandoned its plan when it appeared too complicated to price the assets. Bernanke and then–Treasury secretary Henry Paulson subsequently shifted to recapitalizing the banks directly. “Doing so is shifting from trying to save the banking system to trying to save bankers, which is not the same thing,” Schwartz says. “Ultimately, though, firms that made wrong decisions should fail. The market works better when wrong decisions are punished and good decisions make you rich.”

What of the often cited problem of deflation rather than inflation?

Should we worry about inflation when some believe deflation to be the real enemy? “The risk of deflation is very much exaggerated,” she answers. Inflation seems to her “unavoidable”: the Federal Reserve is creating money with little restraint, while Treasury expenditures remain far in excess of revenue. The inflation spigot is thus wide open. To beat the coming inflation, a “new Paul Volcker will be needed at the head of the Federal Reserve.”

One could add that a new Don Brash will be needed to head the Reserve Bank here as well.
Posted by Paul Walker at 1:08 am