The world's biggest semiconductor maker yesterday was fined a record $1.45 billion by European regulators for allegedly using its dominance to edge out rivals, a decision that has cast a spotlight on similar investigations by U.S. antitrust watchdogs.

After a five-year review of Intel's sales tactics, the European Union's competition commission said the company, with 70% share of the global chip market, gave hidden discounts to computer makers to use its chips and paid the firms not to use those made by competitor Advanced Micro Devices. It also paid a major retailer to stock only computers outfitted with Intel chips, the commission said.

Perry goes on to note 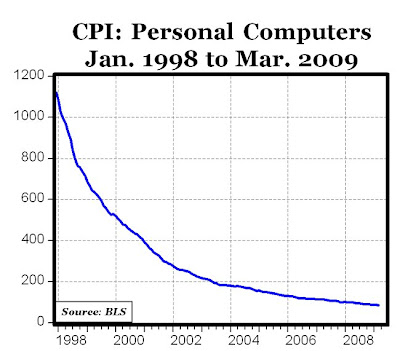 The chart above shows montly "CPI for Personal Computers and Peripheral Equipment" back to January 1998 (BLS data via Economagic here). Adjusting for quality improvements, computer equipment today costs only about 10% of what the same equipment cost in 1998. Consumers have never had it better when it comes to affordable computer equipment, so how can it be claimed that Intel is guilty of anti-competitive behavior that is damaging to consumers?

The true anti-competitive behavior of a coercive monopolist that should most concern government officials is when a producer (or group of producers, i.e. cartel like DeBeers or OPEC) restricts output and raises price. In the case of Intel, just the opposite has been happening: microchip output has been increasing, quality and speed have been improving significantly, and prices have been falling dramatically, and consumers have benefited enormously.

So it seems no matter what firms do, raise prices, lower prices, keep them the same, they can run up against the competition police. This is a great example of the point of the story William Landes tells about why Ronald Coase gave up antitrust,

Update 2: Richard A. Epstein (James Parker Hall Distinguished Service Professor of Law at the University of Chicago) writes at the IEA blog on Monopolization gone haywire. He says

[...] his academic at least can raise two doubts about the Commission’s attack on rebates.

First, no claim of consumer harm can look just at individual cases. It must look at overall market conditions. Here the Intel rebates lowered prices for the 80 per cent of consumers that used its products. What consumer harm could outweigh those particular gains in either the short or the long run? Without these rebates Intel’s share of the market would fall and that of Advanced Micro Devices (AMD), the complainant in this case, would rise from its 12 per cent share. Suppose AMD’s share doubled, Intel would still serve about 2/3rds of the market. Where is the net harm when more consumers are helped than hurt by the rebate?

Second, AMD, as a nondominant firm, could of course offer rebates (or larger rebates) for its products to increase its market share. Now price competition increases, which is all to the good. The EC’s Kroes has gathered the scalp of yet another large American company by intoning the phrase “abuse of a dominant position”. But in so doing she has converted Article 82 into an anticompetitive provision, just as her critics have long feared.

Surely Intel can use its dominance in the market to make low prices (or rather, lower the return on investments for new firms) a barrier to entry ? Microsoft surely has the same intent when it gives away IE for free so no other firm can compete, that way it can reap the benefits of control of the market, preventing others possibly undermining its monopoly.

FWIW, I think Intel has indulged in anti-competitive behaviour, and that consumers have definitiely benefited from the comptetion that AMD has brought to the chip market. If Intel were unrestrained, they could drive AMD out more rapidly, and the competitive gains would have ceased earlier.

That may not be the entire argument, but it does show the basis on which the anti-competitive argument for lower prices is built. Consumers benefit from competition, competition law is aimed (however badly) at trying to maintain competition. Intel are a near monopoly, trying to become an actual monopoly, by way of pricing policies designed to drive a smaller competitor out of business. Reasonably clear ?

Predatory pricing. If the barriers to entry are significant, than cutting prices can be anti-competitive by preventing competition and keeping prices above their competitive level.

I think the microchip industry is likely to have significant barriers to entry. Given the limited number of firms in the industry I can sort of see why europe could be looking into it.

Also I am not sure that we can say this is the result of intel cutting prices - prices have been falling because of technology. The question is - are they precluding entry in order to keep prices higher than they would have been in the competitive case. The CPI graph doesn't inform this question at all ;)

Matt. Never really bought the predatory pricing story, for reasons that go back to McGee (1958). As Louis Plips [Competition Policy: A Game-Theoretic Perspective, Cambridge: Cambridge University Press, 1995, p. 204] points out that predatory pricing is a real possibility only when the following five conditions are simultaneously met: 1) The aggressor is a multimarket firm (possibly a multiproduct firm). 2) The predator attacks after entry has occurred in one of its markets. 3) The attack takes the form of a price cut in one of the predator's markets, which brings this price below a current non-cooperative Nash equilibrium price at which the entry value is positive for the entrant (possibly below a discriminatory current Nash equilibrium price with the same property). 4) The price cut makes the entry value negative (in present value terms) in the market in which predation occurs. 5) Yet the victim is not sure that the price cut is predatory. The price cut could be interpreted by the entrant as implying that its entry value is negative under normal competition. In other words, the victim entertains the possibility that there is no room for it in the market under competitive conditions. The most obvious point here is that these conditions are unlikely to be met.

Surely Intel can use its dominance in the market to make low prices (or rather, lower the return on investments for new firms) a barrier to entry ?But surely of all the possible barriers to entry, "low prices" must rank up their with "better product" as one of the least pernicious.

You have to hypothesize that the company is only competing on superior price and product in order to later charge higher profits in the future. But if low prices are the barrier to entry, won't another firm then join in competition once those low prices are raised?

The idea that if there is not a stronger AMD now, then there could not be a competitor in the future whenever Intel raised prices is possible, but doubtful. Corporate graveyards are filled with companies that dominated their market with superior price and product, and then failed to competitors that came out of nowhere. Especially in the computer business, where new competitors arise seemingly overnight.