The economic analysis at The Standard is not improving. This from Tane in a recent posting there

And there’s no evidence that such a moderate phase-in of a higher minimum wage would lead to higher unemployment. After all, under the last Labour government the minimum wage increased by 70% over nine years, yet unemploment actually halved in that time.

[The graph below is something I whipped up a while ago plotting the real minimum wage against unemployment. You'll see there's no real correlation between the two, despite what your orthodox neoliberals might tell you.] 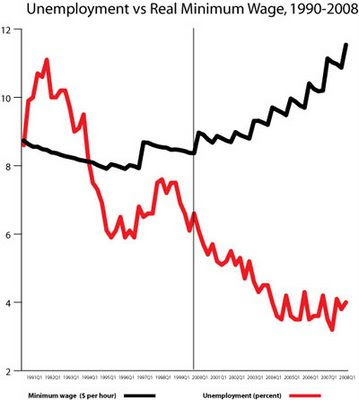 This has got to be the strangest graph I have seen for a long time. It is totally pointless. No economist, anywhere, would argue that the kinds of increases in the minimum wage we see in most first world countries will have any noticeable effect on the overall unemployment rate, of course it won't. This is simply because most wage earners earn more than the minimum wage and so the minimum wage is irrelevant to their employment. Those who are affected are those at or around the minimum wage level. But these are a small percentage of total employment. For example, if you are being employed at $10 an hour and the minimum wage doubled from $1 to $2, so what? Its not going to effect you.

What economists will tell you is that increases in the minimum wage will effect those at the bottom of the end of the wage distribution. In my toy example above the people who will be effected are those in and around the $1-$2 range. Unemployment in this range could increase but as those in this range are a small percentage of total employment, any increase in unemployment in this range will have little effect on the overall unemployment rate. The effects of minimum wage laws are counter-productive for the very people they aim to help - such as young people, women, ethnic groups, and the disabled. Those with, at least currently, low productivity who are at the bottom end of the wage scale. This is where Tane should look for the effects of a minimum wage increase.

So Tane's graph doesn't tell us much of anything, other than that Tane doesn't know much economics. The title of Tane's posting is "Strawman" and I'm afraid his graph is very much a strawman.

For a summary of the work on the effects of the minimum wage see the recent book Minimum Wages by David Neumark and William L. Wascher, The MIT Press, 2008.

Update: In the comments to this posting Matt Nolan reminds me of the case (a perfect monosponistic labour market) where, at least in theory, an increase in the minimum wage can increase in employment, see here for more. I seem to remember this model being used to explain the Card and Krueger results of some years back.

Update 2: I should have added that on the Mankiw list of things economists agree on, number 12 is

A minimum wage increases unemployment among young and unskilled workers.

Given that nobody describes themselves as 'neoliberal', it's a fair bet that anyone using the word doesn't know what they're talking about.

How can anyone deny that a price floor will either be ineffective or lead to lower quantity demanded? You have to be pretty ideologically blinded to claim to understand economics but deny basic price theory.

Brad: not only a lower quantity demanded but also an increased quantity supplied, hence even more unemployment. For the relevant group.

Don't forget the argument that we are changing the marginal cost curve for a firm by setting a minimum wage - something that can lead to higher wages and higher unemployment.

Although - that argument only holds if you believe people who would earn the minimum wage are not supplying enough, and that there are a small number of large firms who pay the minimum wage ...