More on the trans-Tasman income gap

Earlier I commented that Closing the trans-Tasman income gap will take time. I have now read the NZIER working paper that the NBR news article was based on. The working paper makes interesting reading.

The working paper makes the point that the current gap between income in New Zealand and in Australia is large. Income in all of this will be defined to be GDP per capita. For the year to June 2007 New Zealand’s GDP averaged NZ$41,100 per person, equivalent to US$31,100. This is 74% of Australia’s average of US$42,300 per person. The table below comes from page 2 of the NZIER report. It shows that when we use purchasing power parity (PPP) to adjust for differences in the cost of living between countries the ratio of New Zealand income to Australian is 76%. 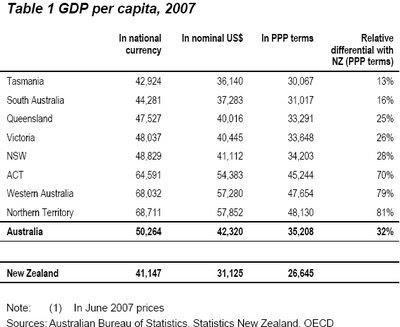 The graph below, from page 2 of the paper, shows that the income gap is not only large but getting larger. In 1974 New Zealand's average income was slightly higher than Australia's but by 1990 it was 16% lower and by 2000 it was 23% lower. Exactly the wrong trend. 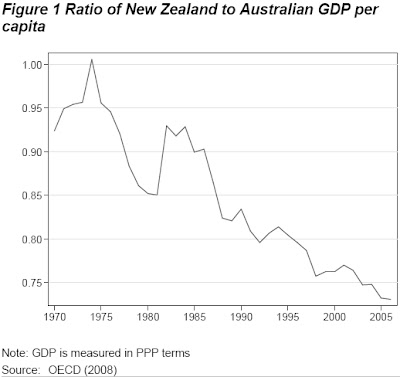 Given this gap the question now is, How long would it take for New Zealand to catch up with Australia?

Note that over the period 2000 to 2007 New Zealand's average income grew at a rate slightly above that of Australia. An average of 2.02% per year, compared with 1.81% average annual income growth in Australia. If incomes continued to grow at these rates, it would take New Zealand 140 years to close its income gap with Australia.

Obviously to catch up sooner New Zealand need to grow significantly faster than we are now. The NZIER report states

If New Zealand’s growth accelerated by half a percentage point (about 25% higher than the average annual rate for 2000 to 2007), it could close the gap with Australia in 41 years (Table 4). If New Zealand’s growth rate doubled, the income gap would disappear in 13 years. At the latter, New Zealand would be able to close the gap with Tasmania in two government terms of office (six years) and with Australian Capital Territory, Australia’s richest non-mining state, in just over a generation (30 years). (p.4)

Table 4 referred to above is given below, from p. 5 of the report. 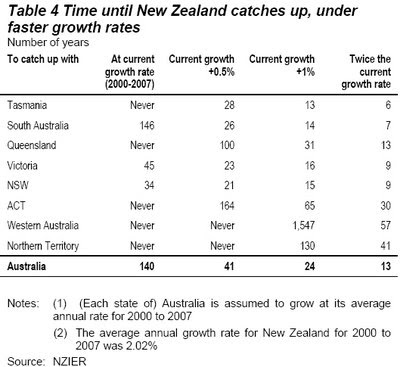 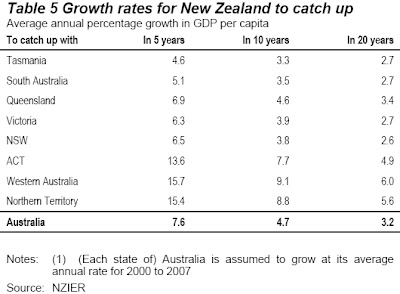 The next question would be, Can we actually produce such rates of growth? Given our past economic performance its seems unlikely. Over the past five decades, there have been just seven years during which New Zealand has annual growth rates of at least 4.7%. This includes only three years of annual growth exceeding 7.6%. The early 1960s produced a five-year period with average growth in excess of 4.6% per year, while the best performance over an 11-year timespan was just 3.5%, around the late 1950s. Not all that great.

If we want to achieve higher growth one of the important drives will be higher labour productivity. As Figure 5, reproduced below from p. 8 of the NZIER working paper, shows from the mid-1980s to mid-1990s, New Zealand actually outperformed Australia in terms of labour productivity growth. 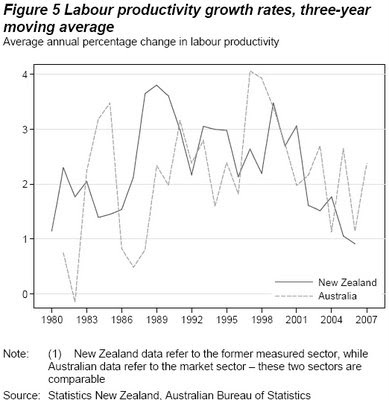 That is the good news, the bad news is that since 2000 we have been performing worse. Worse still is that New Zealand's labour productivity growth is slowing.

With these kinds of trends New Zealand is unlikely to attain the faster growth rates needed to catch up Australia any time soon.
Posted by Paul Walker at 11:52 am

Email ThisBlogThis!Share to TwitterShare to FacebookShare to Pinterest
Labels: productivity