The Adam Smith Institute has blogged on that fact that a statue of Adam Smith will soon go up in the historic heart of Edinburgh.

The announcement gives the details of the statue, see picture, as

The statue shows Smith in later life – he spent the last twelve years of his life in Edinburgh, where he had been appointed a Commissioner of Customs, which might explain his slightly stern look.

Behind him is a ploughshare, modelled from a contemporary plough in the Scottish Farming Museum, which reminds us of an economic doctrine from which Smith made great advances – the physiocrat doctrine that all wealth stemmed ultimately from agriculture. To his front is a beehive, a symbol of industry, topped by a globe on which Smith rests his hand - made invisible by his academic gown.

The most likely date of the unveiling is Friday 4 July.

The statue follows Smith appearing on the English £20 note. He is in fact the first Scot to adorn an English banknote, and the first economist.

Of the four banks that issue notes in Scotland, the Clydesdale Bank has Adam Smith on their £50 note. 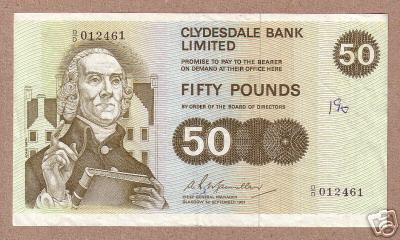 Update: Gavin Kennedy at the Adam's Lost Legacy Blog reports that there is News on the New Adam Smith Statue from New Zealand.
Posted by Paul Walker at 4:44 pm