In capitalist economies, firms pay higher wages to motivate workers who fear unemployment. In Soviet Russia, Stalin used the Gulag to discipline workers. The economic rationale of the ‘efficiency wage’ model helps explain the cruel brutality of Stalin’s prison camps. Marcus Miller and Jennifer Smith have a summary of their research looking at the economics of the Gulag at VoxEU.org. The research itself is available as CEPR Discussion Paper 6621: Punishment Without Crime? Prison as a Worker-Discipline Device.

In the 1930s Stalin faced a problem, If the labour discipline needed for creating a Socialist Utopia was not to be the threat of unemployment - as in the West - what else could it be? His answer, the Gulag.

Estimates by Miller and Smith imply that about half of one percent of the civilian labour force was incarcerated each year, and around one fifth of existing prisoners released (or died in custody). These flows average just under 400,000 per year. Under Stalin's rule the implied equilibrium for the size of the Gulags was about 2 million persons, i.e. almost three percent of the working population in labour camps.

It has been argued that work incentives in capitalist countries are preserved because those caught shirking face the threat of unemployment and loss of income. The 'No Shirking Condition' for wages constitutes the effective labour supply curve for the economy. Labour demand is given by its marginal productivity. Millar and Smith apply the same broad logic to the Soviet system with two significant alterations.

First, in deriving the No Shirking Condition for labour supply, custodial sentences replace spells of unemployment-on-benefit as the worker-discipline device', so the supply price of labour falls not with the numbers of unemployed but with the population of the Gulag. Second, wages are set below the marginal productivity of labour as the dictator exercises monopsony power in the labour market to maximise investible funds.

Miller and Smith point out that

The economic rationale for the Gulag does not encompass randomised terror for political ends: by raising the supply price of labour, it is economically counter-productive. So too is random application of coercive labour laws, exemplified by Stalin’s ‘five per cent rule’ for denunciation.

What the are the main features of the Soviet system?

It is a society where everyone works and substantial resources are generated either for investment or for military expenditure – whatever the dictator decides. The state commands a goodly share of national resources, but wages are pushed down to ‘efficiency’ levels – just high enough to prevent shirking. No-one is unemployed, but many are in labour camps.

Next Miller and Smith look at coercion versus capitalism: survival of the fittest? They provide an overview of their argument using Figure 2 from Punishment without crime? The Gulag as a worker-discipline device. 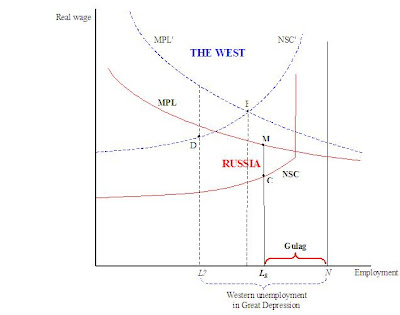 In Miller and Smith's Figure 2 each system, Russian and the West, are represented by two schedules:

a downward-sloping marginal productivity of labour schedule, MPL; and an upward-sloping curve showing the effective supply price of labour (labelled NSC to denote the lowest wage consistent with the No Shirking Constraint).

In the Russian case, shown by the bold curves, the No Shirking Constraint is based on imprisonment. Wages are kept down by the fear of being sent to the Gulag. These wages are set to maximise the resources available to the state. This results in wages being below the marginal product of labour since civilian employment is restricted due to the state's domination of resources.

In the Western case, where those not in work are unemployed on benefit. There is a higher supply price of labour (shown by the dotted line NSC'), and higher labour productivity (MPL'): but equilibrium depends, in the Miller and Smith model, on whether or not there is demand deficiency.

The demand deficiency case is represented by the dotted vertical line in Miller and Smith's Figure 2. With such a demand constraint limiting the quantity of output that can be sold, the labour market equilibrium is at D, with mass unemployment and wages depressed to the lowest incentive-compatible level. Think of a Keynesian explanation for the Great Depression.

What of the Stalinist case?

Due to the low level of capital per head in Russia at the beginning of industrialisation, the productivity of labour is below that in the West; and the compression of real wages is a sign of the effort to catch up with the West by rapid capital accumulation. Real wages are not high in either system, but massive investment in Russia carries promises of a brighter future. Compared with the West in Depression, higher employment in Russia is relatively attractive for those in jobs: but for those not in jobs, the Gulag replaces the unemployment queue.

What of the no demand deficiency situation? Let the Western equilibrium be the competitive equilibrium.

There is no demand failure, so employment rises until the supply price of labour shown as NSC' matches its marginal productivity (and output is maximised subject to the incentive constraint imposed by asymmetric information) at point B.

What of the Stalinist position?

Assume ... that Russia remains in equilibrium at C. What does the command economy offer now? Lower wages; lower output ; and higher coercion.

Thus the economic rationale for the Gulag is as a labour-discipline device and the economic incentives were such that discipline was harsh. Deadly so in many cases.
Posted by Paul Walker at 1:58 pm